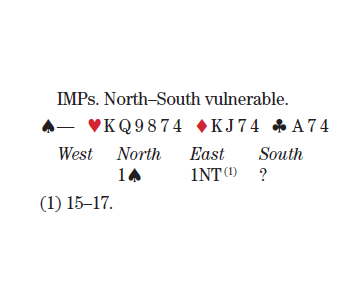 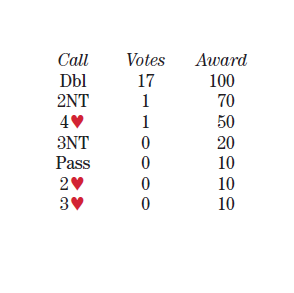 Easy bid for the panel. They are licking their chops at the prospect of collecting many, many matchpoints should the opponents (and partner) leave the double in.

“Start with double and see what happens,” says Meckstroth. “We might be able to collect a huge penalty.”

“We have enough to think they are going for a big number,” say the Coopers, “and they may have nowhere to play this.”

“Double,” agrees Meyers. “I can certainly handle the auction from here.”

Cohen: “Double for now. I sense a joker in the deck. East will likely run to 2♣, but I have no choice but to start with a double, and I would be surprised to see any votes for any other action.”

“Double. Penalties,” says Rigal. “Partner won’t remove to 2♠ unless he has a weak two masquerading as an opening bid, and maybe not even then. Yes, someone may have psyched, but I can’t assume it’s partner at these colors.”

Kennedy gracefully drops the red card on the table. “If they run to clubs, I will bid hearts at my next opportunity.”

East’s bid “looks like a psych,” says Sanborn, who then concedes, “but there are enough points floating around for it to be legit.”

“East may or may not be psyching,” say the Sutherlins, “but lacking a good system agreement, what else makes sense? 2NT would be forcing and show a two-suiter. That bid is not going to work here.”

Falk also elects to double rather than bidding 2NT, which he describes as showing a game-forcing, distributional hand. “That’s not what I have.”

Robinson disagrees, and bids 2NT: “Game-forcing with an unbalanced hand.”

Colchamiro, who was bidding to the beat of a different drummer this month, dispenses with all the lower-level calls and leaps to 4♥. “Bidding what I think I can make. We’re a big favorite for plus 620 in hearts, maybe despite three heart losers opposite