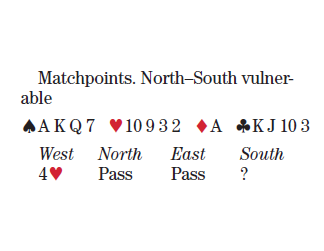 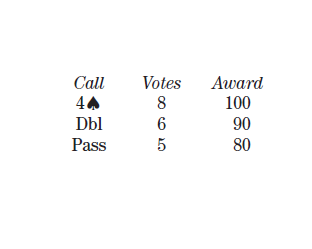 “Isn’t 4♥ a transfer to 4♠?” asks Robinson, leading the plurality of experts undeterred in overcalling a four-card suit at the four level. “Partner figures to be short in hearts and should have some spades, so how bad can 4♠ be? This way, I don’t have to worry about partner bidding 5♥♦/span>. I just hope partner’s spades are higher than East’s or that he has an outside source of tricks.”

“A double of 4♥ is takeout,” reasons Lawrence. “That is given. If you double, you are even money to hear partner bid 5♦. If you choose to bid, your only sane call is 4♠, and the sanity of that bid is not clear. If you do not catch four spades in dummy, you will be okay, maybe. But then, maybe not. East, remember, probably has one or no hearts and if you need heart ruffs in dummy, East will be waiting with overruffs. Any problem that gives you ulcers is good. This one gives you ulcers. I guess 4♠ and am grateful it is matchpoints.”

“Wow!” exclaims Cohen. “I never thought I’d overcall with a four-card suit on the four level. This is taking ‘4♥ by the opponents is a transfer to 4♠’ to a new extreme.”

“4♠,” agree the Sutherlins. “Four over four, we have only four of our suit and we have four of theirs … bridge guesses can be very exciting!”

Even Kennedy is bidding her four-card spade suit. “I need length in spades and, hopefully, the ♣A in dummy to make this,” she says.

Six panelists choose an uncomfortable double — and they’re relieved, indeed, to be playing matchpoints. “I realize that a 5♦ response will make me sorry I’d ever been born,” projects Rigal. “But when they open 4♥ and I have this hand, I suspect we are already behind the eight-ball. Could passing out 4♥ be right? Yes, but I don’t think it rates to be cold, and if minus 420 is our smallest minus, I’ll apologize to partner later.”

The Coopers assert, “Pass would be cowardly.” Their expectation is that if partner is broke, he will pass.

Meckstroth skirts his own lack of diamond support by saying, “If pard bids 5♦, he should have long enough diamonds that we might be okay.”

“I just can’t pass,” says Meyers as she, too, doubles. “If partner bids 5♦, I sure hope she has seven of them … or at least six good ones. She shouldn’t be bidding 5♦ otherwise.”

Weinstein says that 4♠ is tempting, “but double has a bigger target. Unless partner has good spade spots, my heart losers are getting overruffed. Double loses only when partner has six diamonds or when partner has 3=2=5=3 and pulls to 5♦.”

Stack sees the many good things that could happen when he doubles. “We might make 4♠ or beat 4♥ or
partner might bid 4NT for the minors. Some bad things may happen, such as our opponents making 4♥ or our side going for a large number in 5♦. Overall, however, I believe the good outweighs the bad.”

“There are a number of bad things that could happen if I double,” says Sanborn, countering Stack, “so I’m looking for the plus score. Overcalling 4♠ will have its supporters, but isn’t that a little bit kamikaze?”

“Boy, are we glad this is matchpoints!” say the Gordons. “It certainly could be right to bid, but we will take the plus score and hope others are under as much pressure.”

“4♠ could easily win, but unless North has long, strong spades, heart overruffs may spell doom,” argues Boehm. “If North is all diamonds, silence rates to be golden.”