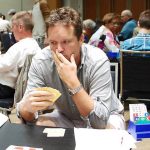 Hi, my name is John McAllister. I have spent the past six years playing bridge all around the world. My goal is to win a world championship. Doing so requires getting into the minds of the world’s best players.

I can not think of a better, more fun way to do so, than to interview great bridge players and share their insights in podcast format.

Our first ever sponsor to be featured on The Setting Trick is Mike Levine. As many bridge players know, a match up against the Levine Team should be dreaded, unless one enjoys being demolished. In tow with his ultimate dream team, which includes two partnerships considered by many to be the greatest pairs of all time, Mike recently won the first 3 North American Online Bridge Championships in a row, a feat of absolute dominance.