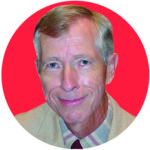 frs1016@centurylink.net
“It’s a lost cause,” the Queen of Diamonds told Alice as the players at the Mad Hatter’s took a tea break. “My cousin the Queen of Hearts will never abide being captured.”
“But Your Majesty knows that losing a trick can be better than winning one,” Alice sighed.
“Deal and you’ll see,” the Queen said. So Alice dealt and opened 1♥. The Dormouse and the Hatter, North-South, then bid to 4♠.

Alice carefully led the ♥Q, winning. When dummy hit, Alice saw that the March Hare, East, would have to produce a trick for the defense to have a chance, but they would also need two diamonds.

Giving the Queen of Diamonds a nod, Alice shifted to the ♦Q. The Hatter took dummy’s king, cashed the A-K of trumps and started the clubs. The Hare ruffed the third club to return a diamond, and Alice took the nine and ace. Down one.

“See what I mean?” the Queen of Diamonds murmured.

Only the queen-of-diamonds shift beats 4♠.


ANSWER
Partner’s 4♦ is an ace-showing cue bid to invite slam. For you to cue-bid 4♥ or 5♦. would be defensible, but since this hand is a minimum for a raise to 3♠, I would sign off at 4♠. If there is a slam, partner may make another move.