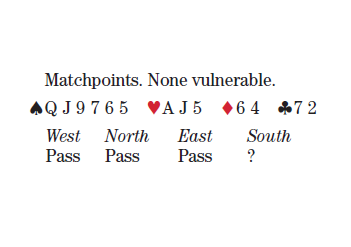 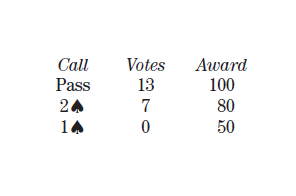 Forget the Rule of 15 for deciding whether to open in fourth seat, says scorer Walker. Move over Pearson Points. Cohen’s Rule in Fourth Seat (CRIFS) is the new law of the land.

What is CRIFS you ask? Proposed when (because) Cohen’s former partner, Marty Bergen, had 11 conventions named after him and he had none, Cohen developed this guideline: Anytime a fourth-seat opener is borderline (10, 11, 12 high-card points), evaluate your opponents! If you are playing against Jeff Meckstroth and Eric Rodwell (or any of the experts on this panel, for that matter, or the best pair playing in your club game), pass the hand out.

You will likely get a middlish result at best. Who needs to open and have to do battle with an expert pair who will fight hard for the partscore and play or defend well?

Continues Walker, “Conversely, if you look up at your opponents and see Schlemiel and Schlimazel (the worst pair), then open the bidding. You can push them around in the auction and you’ll likely get an extra trick or two in the play/defense. You rate to go plus — so don’t pass the board out.”

In the absence of information about their opponents, 13 experts added up to 8 HCP and — despite holding the boss suit — passed.

Lawrence: “Toss this in quickly.”

Meckstroth: “Two people have passed 11-pointers and it’s not my partner!”

Boehm: “Unless partner is a dyed-in-the-wool Roth-Stoner, fourth-seat preempts should be maximums.”

Kennedy: “With 8 HCP and six spades, this hand adds up to only 14 Pearson Points (just short of the recommended 15). Pass.”

Sanborn: “It is close as to whether I think we are favorites to go plus if I open, but in general, a fourth-seat weak two shows a very good preempt, more intermediate than weak. I would surely open in any other seat.”

The 2♠ openers blame it on the boss suit.

“The odds favor us making 2♠, and this is the least misleading way to get there,” says Walker. “I don’t buy into the theory that a fourth-seat weak two should promise a near opener. I play it as a ‘good’ weak two, and although you can argue that this doesn’t qualify, I can’t imagine passing or opening 1♠.”

The Coopers deem it close, but concur with Walker: “We think 2♠ will lead to a plus score. Unlike two of a red suit, 2♠ shows a good weak two-bid.”

The Joyces: “Not clear-cut, but it is the boss suit.”

The Sutherlins add partner’s expected 11 HCP to their own HCP and spades to make the Pearson Point quota. “We expect to make 2♠ more often than not.”

Meyers recognizes she is a little short on HCP, “but I just can’t pass this out.”

Stack, hoping to end up plus 110 or plus 140, quips, “If you don’t mix it up at matchpoints, then you are not playing the game correctly.”