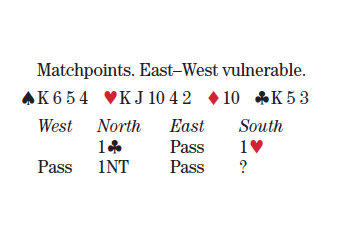 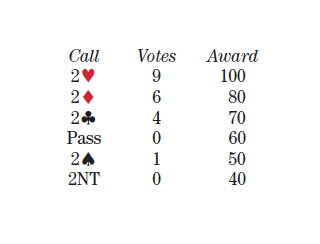 Content to play a partscore, nine panelists escape from notrump into the presumed (hoped for?) 5–3 or 5–2 heart fit.

“We are too soft to invite a game, but this doesn’t feel right for notrump,” explain the Coopers. “The opponents have eight or nine diamonds and unless partner has them double-stopped, hearts should be better.”

“I see no need to use new minor (start of an invitational auction) and go hunting for a magical game at matchpoint scoring,” says Cohen. “We will likely need decent breaks. I suppose if partner is 2–5 in hearts and clubs, we might belong in 3♣, but I don’t want to use checkback and then bid 3♣ (invitational) if there is no heart fit and have partner get us too high.”

Nor is Meyers “stretching to bid game at matchpoint scoring.”

Rigal believes, “Partner won’t have a singleton heart. He’d always open 1♦ or rebid a black suit with that shape unless he has a singleton heart honor. So hearts rate to be our highest scoring partscore. I won’t buy a hand with three hearts and a ruffing value: My partner would raise immediately with that.”

Stack says that the ♥10 was the deciding factor. “Partner probably doesn’t have two diamond stoppers and opponents probably have at least a nine-card diamond fit. 2♥ makes it very difficult for opponents to balance in diamonds, and if partner raises to 3♥, we have enough to bid to game.”

A number of panelists find enough in the hand to warrant at least an invitation.

“Style questions abound,” say the Joyces, who also bid 2♦. “But this hand has enough assets to soldier on.”

Colchamiro thinks the hand has assets and then some! “Particularly with the club fit, game is very likely and even slam could be on opposite:

Although there are four votes for 2&cubs;, two mean one thing while two mean something entirely different. Robinson and Falk bid a natural 2♣. “With a singleton diamond, this hand does not look notrump-ish, and we’re a long way from 5♣ or 3NT,” says Robinson. “If partner is 4=3=3=3, I hope he bids 2♥.”

“Assuming that in SAYC 2♣ is natural, that’s my call because it’s the right call,” says Falk modestly. “Partner has to have at least four clubs unless he has (a) chosen not to rebid 1♠; then partner will correct 2♣ to 2♦, and I can pass or bid 2♠ or (b) partner is 3=2=4=4 with bad diamonds; then 2♣ is our best spot because the ruffs will come in the short trump hand.”

The remaining 2♣ bidders, Lawrence and the Sutherlins, stray from the BBS convention card to play two-way checkback. 2♣ forces 2♦ from partner, after which 2♥ is invitational. “Rebidding 2♠ rates to produce a messy, confusing auction,” say the Sutherlins.

Kennedy disagrees and bids 2♠: “I’ll bid out my shape. My hand goes up in value because of my club fit, and it’s possible partner has four spades.”