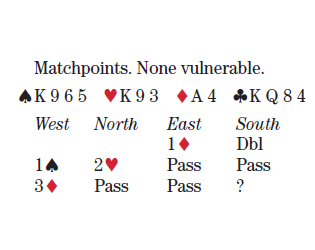 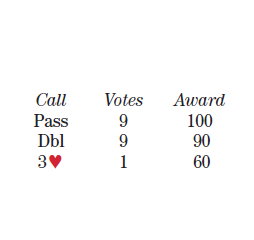 Nine panelists pass and nine double. The strongest opinions come from those who …

“Pass!” insists Rigal. “You have got to be kidding me! Even thinking of bidding is an overbid. I strongly suspect a typo …”

You know Sheriff Cohen is coming down on the side of the LAW. “Surely nobody would violate the LAW and bid 3♥ in this day and age,” he intones a la John Wayne. “Partner would likely have competed to 3♥ with five of them. I’m happy to have pushed them to the three level. I shrug and pass — as I expect most, if not all, of the panel will.”

Robinson agrees. “Partner did not compete further, so why should I? My extra king does not make up for my lack of a fourth heart.”

Falk, who also passes, says, “I have a smidgen extra in the way of high-card points. So in theory, I could double. I have no strong reason to think we could make 2♥, so I don’t have plus 110 to protect. I certainly don’t anticipate beating 3♦ by two tricks, so double is not protecting our plus at all.”

Sanborn confesses that “although it feels like I want to do something, neither double nor 3♥ is right on this hand.”

Enter the doublers, who obviously disagree.

The Joyces double in an attempt to protect the plus 110 they think they had coming. “Partner should know from the auction that my diamonds are not great and consider this an invitation to defend.”

Stack can’t see selling out to 3♦ at matchpoints. “I’m expecting partner to do the right thing with length in hearts or a hopeless hand for defense. The double is flexible and should show solid values.”

“Double, but only at matchpoints,” specifies Meyers. “This should show extras with three-only hearts.”

Boehm, too, says, “Close to maximum defense plus minimal heart length. It’s more of an action double than pure penalty or takeout.”

The Gordons offer a similar explanation. “Now all we have to do is survive.”

The Sutherlins expect more than 6 HCP for partner for his free bid and, with the balance of the power, double back in. “The opponents have found a fit at a low level. Our double is takeout.”

Kennedy isn’t interested in going quietly or leaving the decision up to partner. “3♥. 3♦ may make so I’ll take my chances on getting a plus score.”