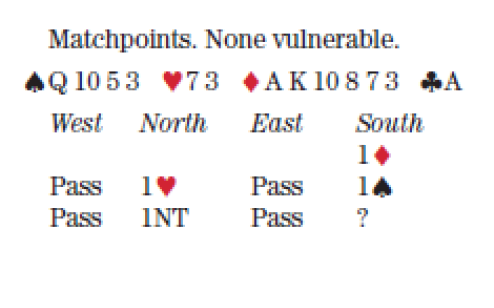 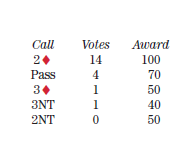 Matchpoint mud
A majority of the panel completes the 6–4 shape description of this hand by bidding 2♦, determining that the minor suit contract will pull more tricks than notrump. 2♦ also has the obvious advantage of being more forward-going than passing.

“In a perfect world, partner will bid 3♦ with some sort of fit and now we can look for higher things,” dreams Rigal. “Facing short diamonds, 2♦ may well be safer than 1NT.”

“Not only is there no guarantee that 1NT is a superior matchpoint partscore, but there are hands where, knowing I have extra length in diamonds, partner can bid 3NT or even 5♦,” theorizes Falk.

Meckstroth pulls 1NT to 2♦ because, “I want to bid again in hopes of getting to game.”

The ever-pragmatic Walker points out: “I won’t get a zero for playing the practical 2♦, but I might for the anti-field 1NT.”

Weinstein, from the batter’s box: “Pass could be a home run, but I’m going for a base hit here.”

Robinson shies away from notrump because of the singleton.

Giragosian and the Sutherlins suggest the hand falls just a king or so short of a jump to 2NT or 3♦.

While Meyers bids 2♦ on this particular hand, she says, “I certainly do not mind 3♦. Vulnerable at IMPs, it would be a clear-cut 3♦ to me.”

“2♦ will take more tricks than notrump, hopefully two more,” say the Coopers. “If the ♠Q were the king, we would think of jumping to 3♦, but this hand is just a tad short of game expectations.”

“At IMPs, I would bid 2♦,” explains Kennedy. “But at matchpoints, I’m going for the bigger score.”

“Pigging out for the matchpoints,” admits Boehm, rolling in the mud.

“Matchpoints hold notrump in higher esteem than IMPs,” says Lawrence, dressing up the language a little.