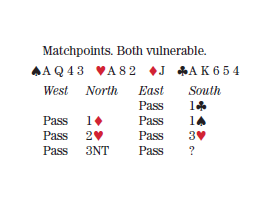 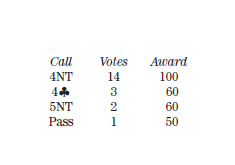 “4NT quantitative looks right to me,” says Weinstein. “I’ve already shaped out, so if partner is accepting, he should be able to pick the right slam.”

“Having bid my shape and not yet shown any extras, I can show my values with 4NT,” says Lawrence. “This keeps 6♣ and even 6♥ in the game.”

“Close to committing to slam,” say the Gordons. “But no fit and poor club spots make us go low.”

“4NT — quantitative,” bids Stack. “We haven’t yet shown the strength of this hand. We are at least a full ace more than an opening bid.”

“Partner is forcing to game and I have substantial extras,” says Meyers. “Partner will play me for short diamonds and hopefully be able to evaluate his hand.”

“4NT natural and invitational,” agrees Robinson. “Partner is unlimited, and I have yet to show extra values.”

Both Boehm and Colchamiro quarrel with the 3♥ call. “2NT would have allowed partner a convenient opportunity to show either club or diamond orientation,” Boehm argues. “Now, he may feel endplayed with modest club support, unwilling to bypass 3NT.”

“3♥ may have been the ‘descriptive’ bid, but it preempted the auction,” says Colchamiro. “Maybe partner wanted to show a club raise or long diamonds. Feels like 2NT would have been a better choice.”

Sanborn bids 4NT. “A 4♣ bid might help, but I have shown my hand within a card, and I don’t want to overemphasize clubs.”

The Coopers, Giragosian and the Sutherlins elect to go the 4♣ route. “We have enough extras and 4♣ describes our hand perfectly: good five-to-six-card club suit with four spades, three hearts and short diamonds,” say the Sutherlins.

The Coopers join Boehm and Colchamiro in the 3♥-hater camp. “Why not bid 3♣ and then pattern out with 4♥?” they ask. “Now it will be hard to convince partner we have good clubs.”

Giragosian bids 4♣, saying, “I still think we may have a slam. If partner bids 4NT, we will play it there.”

Walker and the Joyces feel more certain about slam and use the device — “5NT pick a slam” — to ask partner, “Which slam?”

“Too good not to force to slam,” say the Joyces.

“4NT feels like an underbid that puts too much emphasis on notrump,” says Walker. “If partner was looking for a heart stopper, I don’t have the right hand for 6NT (or even 4NT). 6♣ rates to be better if he has support.”