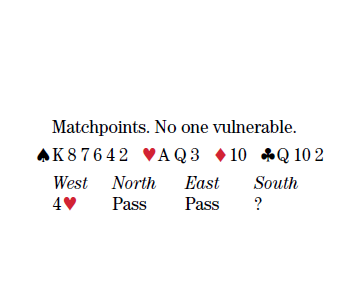 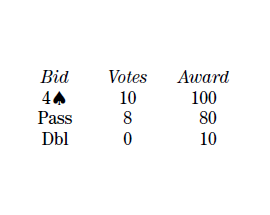 Take the bait?
It’s shocking that 10 experts would so readily accept the opponents’ 4♥ transfer to 4♠ with this thoroughly moth-eaten holding and more high-card points in the enemies’ suit than in “our” suit.

Leave it to Rigal to wax literate: “Oscar Wilde remarked that he could resist everything except temptation The 4♥ call tempted me, and I bid.”

Falk comments, “I think everyone will bid 4♠. Some days we’ll catch a suitable dummy; other days we’ll look silly. Yes, we’d all like better spades and less stuff in hearts, but those drawbacks notwithstanding, the player with six spades is probably the one who has to bid them.”

The Joyces bid 4♠ and bow to the effective preempt. “We hope it doesn’t go Pass–Pass–Double.”

“Live by the sword …” says Sanborn. “Most modern players accept the occasional disaster by bidding, but not the fix by passing.”

The normally conservative Cohen asks, “Isn’t 4♥ a transfer? This is SOP these days.”

The Sutherlins go so far as to suggest that “passing would get us nominated for Bridge Wimp of the Year (BWOTY)!”

Rarely (if ever) has Meckstroth been a contender for BWOTY. “It is tempting to bid 4♠ but the combination of good hearts and weak spades makes defending the best option,” he says, passing.

Weinstein (not usually on the short list for BWOTY either) agrees. “I think I am significantly more likely to go plus by passing rather than bidding.”

Colchamiro calculates before he passes. “Looks like we have a better chance at four tricks on defense than 10 tricks on offense. Opposite a random hand such as:

4♠ would need much luck to prevail, but 4♥ is probably down. Much tougher problem at IMPs.”

Lawrence passes, too: “Cowardly, but I have excellent defense. Bidding 4♠ is threading the needle. If my hand suggested 4♥ might make, I would be happier bidding 4♠.”