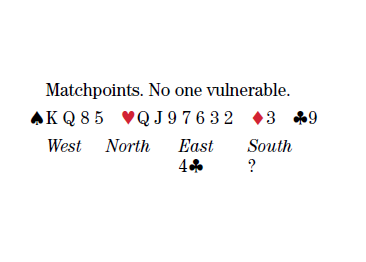 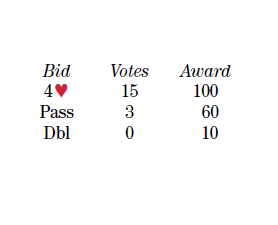 More aerial antics
This time we have shortness in their suit and extra length and a little bit more body in our suit. What we lack in HCP we make up for in distribution, right?

Right! urges a clear majority of the panel.

“4♥. When short in the opponents’ suit, be aggressive,” says Robinson. “I know partner might expect more, but a good partner will give you leeway and when in doubt, go conservative after a preempt.”

“This is aggressive but it seems like I need to get into the bidding,” Meckstroth says.

“A little light,” say the Sutherlins of their 4♥ call. “It’s a somewhat dangerous bid, but passing would seem to be more dangerous since we could be missing game.”

“This could work out horribly but, again, should the player with 7–4 distribution bid, or the partner with unsuitable distribution and more high cards?” asks Falk. “There are too many hands where we are cold for a major-suit game and partner cannot balance. Imagine partner with:

passing 4♣ like a shot and being delighted (briefly) with himself when he discovers we have a stiff diamond. ‘Dodged that bullet!’”

Stack bids 4♥, but not without trepidation. “This is a great playing hand despite the lack of high cards. We will hate it if the opponents compete to 5♣ and partner doubles. On the other hand, this initial action may enable partner to compete to 5♥ if the opponents bid 5♣.”

“A disciplined pass?” queries Colchamiro. “I just can’t get myself to do that.”

Per the Gordons, “For the same reason we made a conservative pass on the first problem, we stretch to bid 4♥ on this one. It is incumbent on the short-trump hand to do the pushing.”

Walker pre-apologizes. “Sorry partner, but with a five-loser hand, I just can’t let them play 4♣ at this vulnerability.”

“This hand has so much playing potential,” says Meyers. “I hope partner doesn’t hang me.”

“You do not need much to make 4♥ and there are slim chances of making slam,” says Lawrence.

The three passers, oddly enough, all opted to bid 4♠ on the first hand. This time, they are a clear minority.

“Now, finally, you got me to pass a hand,” says Rigal. “But here I’m willing to bet that most will ask, ‘What is the problem?’ as they let it go around to partner.”

“If I bid 4♥ and partner has enough for us to make it, the dolt will carry us overboard,” says Boehm. And what if West bids 5♣? Can we trust North’s double? Or should we pull and go for a number? No thanks!”

“I would like to bid, but we probably can’t stop low enough if partner has enough for me to make 4♥,” say the Joyces. “The auction isn’t over yet, and hopefully, we will still get to choose offense. We would certainly bid 4♥ in the pass-out seat.”