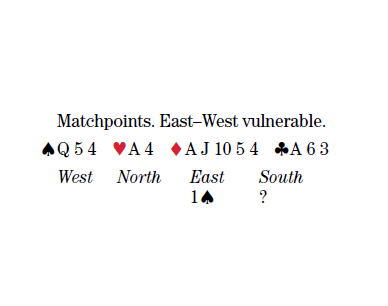 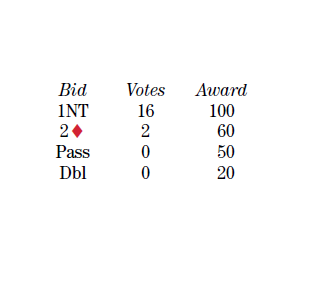 One call says it all
With a hand that every strong notrumper would open 1NT, the panelists emphatically favor carrying that thought process forward and overcalling 1NT when RHO opens 1♠.

From poets’ corner: “We can’t tell if we should be coming in or not, but faint heart never won fair lady.” Rigal, of course. “Nor, as I recall, did he go for 500 against nothing!”

“This is a bidder’s game.” “I would rather have better spades, but I prefer 1NT to 2♦, especially on this distribution,” says Meyers. “The ♦10 is the kicker.”

The Coopers, too, give some thought to 2♦, but decide on 1NT. “The advantage of 1NT is that partner can compete effectively. 2♦ puts all your eggs in one basket, and its main advantage — indicating a lead — is not helpful when you are the one most likely to be on lead.”

Boehm describes 1NT as “reasonably descriptive” and adds, “If we’re doubled, it leaves us more bailouts than a 2♦ overcall.”

Meckstroth uses 1NT to get into the bidding, as well. “Can always bid 2♦ later if it seems right.”

Falk says, “I’d prefer one-and-a half spade stoppers, but 2♦ is much worse and pass is not an option.”

“1NT is the perfect bid on HCP with the added asset that we have a suit to run to if we get hit with a penalty double,” says Stack. “This contract may be better played from partner’s side, but we have to bid what we are looking at.”

“We are nonvulnerable, and 1NT describes our entire hand in one bid,” says Weinstein. “2♦ conveys a better and longer diamond suit and doesn’t show the strength of my hand. When I have a bid that shows my entire hand in one call, I try to make it.”

“1NT. What’s the problem, other than the usual risk of LHO doubling?” ask the Joyces.

Lawrence offers this analysis: “Whether you bid 1NT or 2♦, you need some help from partner. You could pass, but your aces and good diamonds suggest bidding. Because it is easier for partner to respond to 1NT than to 2♦, I choose 1NT.”

The Gordons overcall 2♦. “Not beefy enough to bid 1NT with this kind of stopper,” they say. “We would pass at different vulnerability, but here we chance 2♦ so at least partner will play us for some cards.”