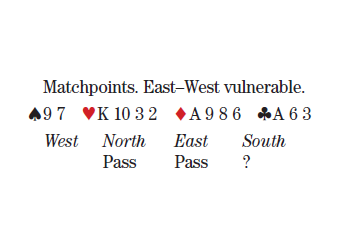 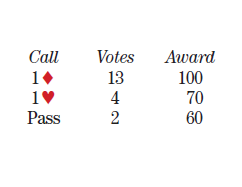 Finding an opening
Weinstein has an interesting philosophy: “Basically, always open the bidding when you have an opening bid and sometimes even if you don’t in third seat. This hand is an opening bid. I have two aces and I am fine rebidding 1NT over partner’s 1♠ response.”

Meckstroth agrees. “I like the vulnerability and I would have opened in first or second seat.”

“We have no problems with an opening bid, though a weak notrump (which we play) might be more effective,” conclude the Joyces.

As Kennedy points out, “With two and a half quick tricks, I’ll try for a partscore. It’s better that I get my say in at the one level rather than balancing at a higher level later on in the auction.”

Walker elaborates on the advantage of 1♦. “No reason to skew my distribution with 1♥ when I have a ‘real’ diamond suit, especially since 1♥ isn’t any more preemptive than 1♦.”

Cohen disdains the quality of the heart suit. “It is worthwhile to open light at these colors, but the hearts aren’t good enough for me to distort it into opening a four-card major.”

Falk explains more about his choice of 1♦: “Because my partner may already have passed an 11- or even a bad 12-count, I can’t risk a pass-out when I have an above-average hand, so pass does not get my vote. At IMPs, I might worry we cannot stop where we are likely to go plus, and pass would be a more attractive option. At matchpoints, I hate to just give my opponents a free run when we may well be able to compete for a partscore.”

Boehm looks ahead to his second bid — as should every astute player opening the auction — and notes, “1♥ commits me to a 1NT rebid over 1♠, but that isn’t necessarily bad.”

Robinson clarifies his 1♥ call: “If I open 1♦ and partner responds 1♠, I can’t pass. Opening 1♥ gives me two chances to find a fit. If I open 1♦, I will have no chance to find a seven-card heart fit if that’s our best possible fit.”

“I prefer a heart lead to a diamond lead, and my bidding box has no pass cards in it,” quips Rigal. “With the suits reversed, I’d open 1♦. A lot depends on whether partner can take a joke; I sometimes feel I’ve worn away my partner’s sense of humor altogether.”

Two experts do have bid boxes complete with pass cards, and they use them.

“Why open up the hornet’s nest?” asks Sanborn. “I don’t have spades or a rebid or a lead director. If the opponents open, maybe I can show red suits next time.”

The Gordons pass, too. “Two small spades is a bad sign on a marginal hand.”