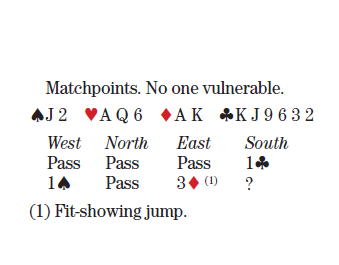 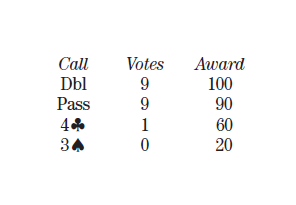 Action
Double gets the edge because 4♣ breaks the tie between bidding on and passing.

“I don’t imagine any panelist views this double as anything other than a takeout double, so that’s not really an issue,” says Falk. “The issue is pass or double. I’d like to have another heart, but unless left-hand opponent passes or redoubles, partner will not have to do anything unless he wants to.”

Cohen wishes he had “a small red card to mix in with the hearts when I table the dummy in a heart contract.”

As does Meyers: “I would rather have four hearts, but I am not going quietly.”

“Double is a bit less unilateral than repeating our clubs,” say the Joyces, “but we’re hoping partner won’t have to bid a four-card heart suit. The hand is just too strong to go quietly, and the opponents will likely bid on anyway.”

Weinstein isn’t so worried about that fourth heart. “Double should be a takeout of spades and diamonds. I think the ideal shape for this is 1=3=3=6 since I didn’t slip in a 3♥ bid over 3♦. If we buy the hand, it’s very possible we get the smallest minus by declaring.”

The Sutherlins’ hope: “As little as ♥K–x–x–x–x–(x) in partner’s hand gives us a reasonable play for game, and he won’t bid unless we show extra now.”

The Coopers double, knowing “partner has next to nothing. But maybe he has heart length or club support. We just can’t bear to pass, and 4♣ is too unilateral.”

Nearly half the panel can bear to pass, and do so easily. “Partner’s pass over 1♠ is a huge warning,” states Colchamiro. “I can’t bring myself to bid 4♣. With the diamond fit bid in front of me, clubs could easily be stacked behind me.”

Robinson, too, notes the resounding thud of partner’s pass. “Partner didn’t make a negative double, so he doesn’t have hearts. He didn’t raise clubs, so he doesn’t have four. If he has clubs or hearts, he has a very weak hand.” Lawrence calls attention to the lack of a negative double as he passes. “Partner did not double, showing hearts, and you have too weak a club suit to be bidding that at the four level.”

Walker adds another worry to the list. “I can’t think of a single sane way to show these values — or any reason to try. If partner is as broke as it sounds, bidding again might just push them into a cold 4♠.”

“A great hand, but at this point, it doesn’t look like we have a game or partscore,” says Stack. “It’s dangerous to bid 4♣ before LHO bids, as we may take a minus score when we have a positive score coming. If the opponents stop at 3♠, we can reevaluate, but the die has probably been cast by passing now. Also, the opponents have made a fit-showing bid without the ♦A K, so they are very likely to misevaluate and get too high.”

Meckstroth likes living dangerously. He bids 4♣ because, “I’m not going to pass, and double sounds like I have diamonds. Perhaps I should bid 3♥, but that might work out very badly.”