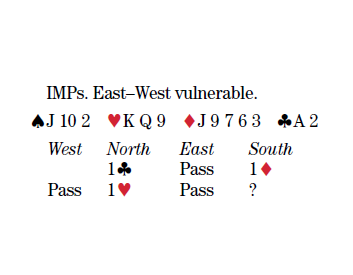 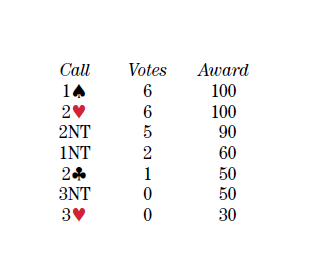 Free-range bidding
So many choices, and not a single one feels like it fits properly.

Boehm vamps with 1♠. “Perhaps partner’s next bid will help. Perhaps this will inhibit a damaging lead. Perhaps I should do something else.”

Kennedy bids 1♠, too. “Partner shouldn’t raise without four. With 11 points, 1NT would be an underbid.”

Ditto Meckstroth: “I am hoping to raise 1NT to 2NT.”

Rigal uses 1♠: “forcing, but not to game, to allow partner to play a notrump contract with ♠A x. If partner bids 2♣, I’ll bid 2NT, inviting game and suggesting doubt.”

“With a choice between 2NT and 1♠, we’ll opt for 1♠,” say the Joyces, “hoping that partner will bid notrump and it will play better from his side. (Systemically, 1♠ would be natural and a one-round force, but not gameforcing.)”

Falk proposes 2♥. “Yes, I know, I’m a heart short. But I have extras — and partner should know I can’t have four hearts and a 6–8 point hand, as I would have responded 1♥ most of the time. I have great cards for partner, who has shown at least 4–5 in the round suits. With flatter distribution, partner would have rebid 1NT.”

“I know you’re not supposed to raise partner’s second suit with only three-card support,” states Robinson as he raises 1♥ to 2♥. “I’ve gotten good results playing the 4–3 fit. Without the ♣A, I would pass 1♥.”

“What an aggravating problem!” Lawrence blurts out. “2NT is almost perfect. 3♥ is worth considering. But both are flawed. 1♠ would be a creative stalling bid. I vote for 2♥, realizing that this is just as flawed as other bids. At least I improve my chances to go plus, even if it is a small plus.”

Of his 2♥ call, Colchamiro asks (rhetorically, presumably), “Isn’t this hand a classic for raising opener’s second suit (major) with only three trumps? Three good hearts and maximum high-card points. I’m presuming that for this auction, partner has at least four clubs and four hearts, so diamonds and/or spades might well be a risk for play in notrump.”

“2♥. I can’t bring myself to bid 2NT with this hand,” says Weinstein. “Nonvulnerable, I don’t mind underbidding a little, and I am hoping that with some of the right hands, partner bids 2NT so that I can raise.”

“2NT — a good, old-fashioned, invitational bid,” say the Sutherlins. “That is the best value description of our hand. A 1♠ bid to learn more about partner’s hand doesn’t rate to help us reach the best spot.”

Walker bids 2NT. “Not enough for 2♠ (artificial game force denying four spades) so I’ll have to call ♠J 10 x a stopper. A 1♠ punt rates to create a worse problem than the one I already have.”

Cohen can’t find the bid he really wants to make in his bid box. “I was thinking 1½ NT. My ♣A and ♥K Q are very useful cards for trick-taking (picture the ♣K Q and ♥A J opposite), so I selected the higher bid. Oh, I don’t have spades stopped? Well, that’s why it’s a problem!”

Stack makes the 2NT “value bid, even without a spade stopper. At matchpoints, taking the low road of 1NT has some appeal, but at IMP scoring, it is too big of an underbid.”

“I have too many HCP to pass, but no real spade stop and no fit for either of partner’s suits,” laments Hampson. “So I will keep the bidding going with 1NT (although things are likely to end soon). If we are unstopped in spades, I hope they don’t have that many of them.”

“With no real spade stopper, I prefer the low road with 1NT,” says Sanborn, “rather than the point-showing 2NT. It rates to work more often than not.”