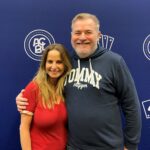 Winners of the Rockwell Mixed Pairs, May Sakr and Jacek Pszczola

It’s the first NABC+ win for Sakr, Pszczola has won seven national events. The pair was third in the Lebhar IMP Pairs earlier this week. 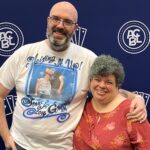 The pair, who qualified in eighth place going into today’s final sessions, scored consistently throughout the event, posting 59.13%, 58.51%, 58.20% and 59.78%. They were in third place with one round to go; Carmichael–Humphreys were leading with one round to go. Two below-average scores for Carmichael–Humphreys flipped Sakr–Pszczola into first by 23/100 of a matchpoint. Top on a board was 59.

“I feel amazing,” said Sakr. “This time I was fighting until the last board. Usually, I give up in the middle, but this time I really played my best because we lost the IMPs on one board that I messed up and I wanted to make it up for my partner.”

Even though Pszczola is a multiple national and world champion with over 20,000 masterpoints, he still isn’t technically a Grand Life Master. “I think I need about 30 black points,” said Pszczola.