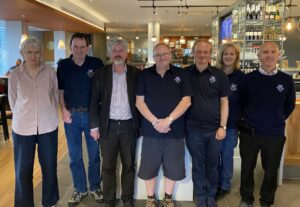 When Team Scotland says no to cheaters, they mean it.

For the ethical conviction and courage they demonstrated at last summer’s Online European Qualification Competitions for the World Team Championships, Scotland’s Open Team is the recipient of the 2021 Sidney H. Lazard Jr. Sportsmanship Award.

First to face an Italian team that included an unapologetic convicted cheater, the Scottish team quietly refused to take their virtual seats at the bridge table; they accepted a zero for the forfeit rather than dignify their opposition by playing the match.

“This tribute is given to those who play the game with dignity and honor,” said award committee member Zia Mahmood, informing the team of their selection. “The committee is aware that your team was not looking for any public recognition, but your actions are exactly what Sidney Lazard encouraged when he created this award.”

Hay, of Team Scotland, said, “As a bridge player, I feel very humbled to be honored in this way. All we did is stand up against a situation that was not right. When I see the list of previous winners of this award, it makes me very proud.”

The Italian Bridge Federation subbed in Fulvio Fantoni for a player whose work commitments prevented him from participating in the competition. Fantoni and his partner, Claudio Nunes, were convicted of collusive cheating by the European Bridge League in July 2016 and suspended from play for five years.* Earlier in 2016, they had been suspended by the Italian federation and received the maximum sentence under the Italian regulations – a three-year ban. Collusive cheating – partners communicating by way of prearranged signals – is considered the gravest offense in the game of bridge.

The American Contract Bridge League also found Fantoni and Nunes guilty of collusive cheating later in 2016 and expelled them.

While the Italian Bridge Federation condoned Fantoni’s participation in the 2021 qualifying competition and the EBL credentialed him, the presence of an unrepentant cheater on the Italian national team’s roster outraged the elite-player bridge community.

Daily Bridge Bulletin journalist John Carruthers posted a message on bridgewinners.com that he received from Erikas Vainikonis of Lithuania: “I would like to give a special bravo to Scotland,” said Vainikonis, “It’s always the hardest thing to go first! I think they made it much easier for all of us who went on subsequently. I strongly believe that ‘the wave’ will go on, and the message that has been sent out today will be heard.”

In an extraordinary demonstration of unity, all of Europe followed Scotland’s lead. What started as quiet sit-out crescendoed as all 30 teams slated to face the Italian squad either failed to take their seats or neglected to submit a line-up. Italy finished third in the tournament without ever turning a card.

“It was amazing to watch it unfold as all the other teams followed suit,” said Peterkin from Scotland.

Mahmood applauded the trend set by the Scottish team. “As other countries have followed in this protest, it is clear the bridge world is today shouting this message to the authorities: Bridge is a game of honor. While we all are bound to accept the rulings of the judiciary, the greatest heroes are those who live by the dictates of their conscience. For what can we win when we don’t have honor? The people have spoken, and we are proud again.”
Several national bridge organizations issued statements of support for the players, among them the English, Dutch, Swedish and Swiss bridge authorities. Finn Wardi, chairman of the Nordic Bridge Union, agreed with the sentiments expressed by those federations on behalf of Denmark, Faroe Islands, Iceland, Norway, Sweden and Finland: “Summarizing, it is a question of honor and sticking to the principles. The players have shown remarkable courage which should be listened to.”

“Team Scotland is surprised and honored to receive this award,” said Punch on behalf of her squad. “It was time for the players to take a stand. It was so great to see all competing countries join in. Sometimes actions speak louder than words.”
Lazard established the Sportsman Award in honor of his son to “enhance sportsmanship among top players and to salute those who try to win with class and dignity.” Administered by the ACBL Educational Foundation, the award will be presented at the next ACBL Hall of Fame banquet.

* Fantoni and Nunes appealed the EBL determination to the Court of Arbitration for Sport (CAS), an independent court of last resort for international sports disputes. The CAS panel, made up of non-bridge experts, was unconvinced by proof that three national bridge organizations found damning. By a vote of 2-1, CAS cited insufficient evidence to prove the pair’s guilt; they did not exonerate the pair, they did, however, set aside the guilty verdict, and left the EBL to pick up the legal tab.