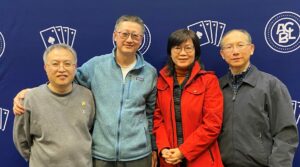 The team captained by Ping Hu won the first 0–2500 Swiss Teams on Wednesday. Hu played with Henry Shi, both of Naperville IL, and Yanping Zhang and Henry Zhang of Ann Arbor MI.

They had a rough start in Tuesday’s qualifying sessions after the Zhangs had travel woes, getting stuck in Phoenix and only arriving in Reno on the morning of the event. They qualified 13th out of 16 teams, 27 victory points behind the leaders.

Then, in the first final session, they lost two of their first three matches, dropping a spot to 14th. They began their comeback in the fourth round with a blitz and continued with near blitzes in the next three matches, taking the lead when they beat the team captained by Bruce Peterson in the seventh round. A last-round tie left them ahead of Peterson by 3.5 VPs. 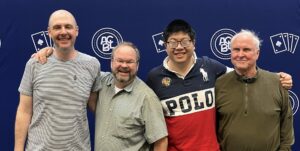 In second were Peterson of Aloha OR, Kevin Marnell of Portland OR, Danning Lu of Goleta CA and Andrew Mitchell of Oak Harbor WA. They qualified in second place and were in first or second until they ran into the Hu team.

Zhang and Zhang, unrelated co-workers, won the North American Pairs Flight C in 2017 and 2018. Hu has three second-place finishes in limited NABC events and Shi two, including last year’s GNT Flight C. Hu and Shi were second in the 2011 GNT Flight C playing together. Hu has also been second in the Young 0–1500 Pairs and Micro-Spingold.

“This is great,” Hu said of being first instead of second for a change.

Shi met the Zhangs at the 2016 Reno NABC when they were playing in the NAP C. They put their team together on Monday.