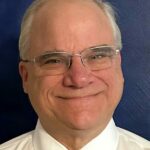 John R. Mayne of Modesto CA has won the Fall 2023 NABC Robot Individual. His combined score of 69.22% earned him first overall in Flights A and B. Mayne’s first session score of 66.63% was a good start but relatively modest for the robot event. Mayne took the top spot with a 77.11% in the second session and 63.93% in the third and final session.

Second in Flight B with 64.55% was Oyvind Tafjord of Seattle WA. Third in B was Jim Dickson of Baltimore MD.

First in Flight C with 62.54% was Raji Jarjour of Burbank CA. Tied for 2/3 in Flight C was previous winner Wangfeng Mou of Sugar Land TX tied with Vladimir Kolbun of Forest Hills NY.