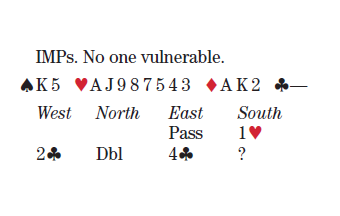 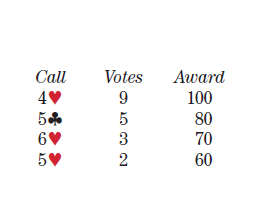 While 4♥ may seem tame on this offensive powerhouse, it is the bid of choice for nine panelists.

Stack is one of the 4♥ bidders, but he has misgivings. “Because partner’s negative double indicates help in diamonds and spades, 4♥ doesn’t seem like enough with this hand. I actually have a sneaking admiration for 6♥. Barry Crane always said, ‘Don’t play me for the perfect hand. I never have it.’”

“Slam may be on but we will need a boost from partner to get there,” say the Sutherlins. “If we double or cuebid, and partner bids spades, what do we do?”

Walker: “It’s 4♥ or a ‘gambling 6♥,’ as none of the in-between bids will drag anything helpful out of partner. 5♥ sounds like I’m looking for a club control and 5♣ would be a cuebid in support of … what?”

Meckstroth treads carefully. “We could easily make a slam, but I don’t really have safety at higher levels.” Kennedy, on the other hand, is on surer footing. “4♥. Why not?”

Falk points out one more pitfall. “Those who consider themselves ethical players must learn to bid 4♥ in tempo with a hand like this. If you think a long time and then bid 4♥, partner knows you have extras.”

Colchamiro calls a 5♣ cuebid “a good place to start.”

Weinstein takes partner’s seat to hear what a 5♣ cuebid sounds like from the other side of the table. “While it is possible that partner might misinterpret 5♣, we have 5♠ as a way to show spades and 5♥ as a way to show five-plus hearts,” he says. “I think 5♣ is just a general try with a club void. 5♥ could work, but partner won’t be able to judge when to pass and when to bid on accurately enough. Hopefully over 5♣, partner will bid 5NT — pick a slam — with a hand he likes and 5♦ to find out where I’m coming from with a hand he doesn’t like.”

Cohen, Meyers and the Coopers boldly leap to 6♥.

“A stab in the dark,” says Cohen, “but I can’t think of any scientific action to get partner to realize that ♠A–Q–x–x along with two low hearts is enough for slam.”

Meyers gives partner a couple more measly holdings with which he’d never picture a making slam and relieves him of the guess by bidding six herself.

The Coopers would have opened 2♣ and avoided this entire discussion. But given the auction, they believe that “bidding 5♣ or 4NT now is about spades, the last suit bid by the means of a negative double. So we take a shot at 6♥.”

Boehm calls it “a general slam try, not club specific with so little prior description.”