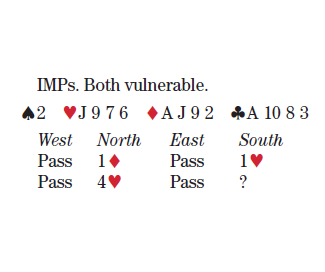 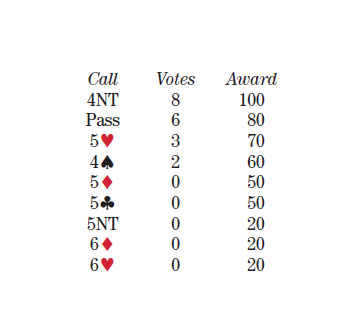 Because I’m worth it
Rigal surveys his options and concludes: “4NT, planning to bid 6♦ over a two key-card response. 4♠ won’t really help because partner might be worried about the absence of both minor-suit aces with, e.g.,
♠A x x  ♥A K Q x ♦K x x x  ♣K x,
“The clear choice is 5♥, but the problem is that partner might think he had a terrible trump holding with A–10–8–x.”

“I’d pass at matchpoints,” indicates Walker, “but at IMPs, I’m going for the tie. I think these controls will induce my opponent to bid more, so I’ll do the same. 5♥ would ask for good trumps, but partner could bid 6♥ off two aces with ♥K–Q–10–x or pass and miss a decent slam with ♥A–10–x–x.”

“4NT,” agrees Meyers, “only because I have such good diamonds and first-or-second-round control of the other two suits. This may be anti-percentage, but partner could easily have:
♠A x x  ♥A K Q x  ♦K Q x x  ♣x x.”

The Joyces, too, are impressed by their controls. “But I wish my trumps were a little better!”

The Sutherlins assume captaincy by key-carding because of the singleton spade. “It should be easier for us than partner to determine the level we want to play this hand: 5♥, 6♥ and 7♥ are all possibilities.”

Cohen flips his chestnut locks and RKCs for hearts. “I’m worth it.” Who’s to argue?

For a start, the six passers.

“Just depends on how much pard has in spades,” says Meckstroth, putting the green card on the table.

“There could easily be wasted values in spades, and the five level could be dangerous,” says Stack. “Partner may have made an aggressive bid, and the poor trumps say that we should be cautious.”

and we have at least three trump losers. If I was going to continue, the last bid I would make is a spade cuebid.”

Lawrence cuebids spades. “Assuming it is not asking for aces, 4♠ lets partner ask for aces if he can. He won’t know I have a singleton spade, but i hope that won’t be a problem. I do not like bidding 4NT myself since I am missing so many important cards.”

For the Coopers, 4♠ is key card, and that’s the bid they make.

The Gordons and Kennedy focus on the quality of the heart suit. “5♥,” offer the Gordons. “Key card doesn’t help us. It is all about the trump suit. We have too much to pass.”

Colchamiro also bids 5♥, but his message is somewhat different. “If I cuebid 5♦, do I deny other controls? So maybe I should control bid 4♠. Since I didn’t cuebid any of them, doesn’t 5♥ show all of them?”