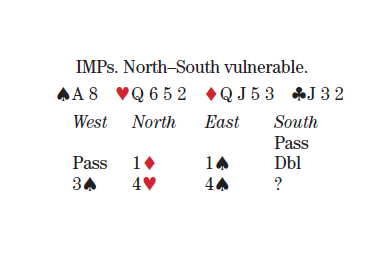 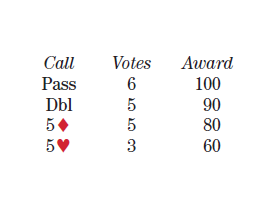 Shaky ground
While there is much uncertainty, the consensus seems to be that a pass in this situation is not forcing. The panelists electing to pass are
allowing partner a little leeway.

With a spade control and a double fit, Sanborn says she’s willing to hear more from partner. “But that doesn’t mean I should force to the five level.”

“Partner expects us to have 8–10 points and four hearts,” say the Sutherlins as they, too, pass. “That is what we have. Leave the decision up to him. He has a better chance of doing the right thing.”

“Pass,” says Cohen. “Brutally difficult. I’m not sure of this at all, but I hope I did it in tempo so as not to bar partner.”

“This is a tough one,” agrees Meckstroth, who decides to double rather than pass. “I would like a pass to be forcing but it isn’t, so I feel the need to do something. I don’t want to get stampeded to the five level.”

Lawrence doubles, too. “Pass would probably be considered forcing, but these values and shape are dangerous. The spade holding hints that we may have a spade loser, and there are too many possible losers elsewhere.”

Rigal justifies his double: “Too balanced to assume we can make 5♥. Partner, with a shapely defense-poor
hand, ♠x  ♥A K x x  ♦A K x x x x  ♣x x, can override, not that I’d expect him to. If I double in tempo, he might work out to pull. I agree I might have excellent defense, but since pass is not forcing, it has to do double duty for extras and no shape, with or without trump tricks.”

“Bad trumps, soft values, partner might have stretched to bid 4♥, and I don’t think pass would be forcing,” says Walker, summing up her double.

The Joyces are more straightforward about their double: “We hate to be pushed to the five level.”

The 5♦ bidders take this opportunity to clue partner in on the double fit.

“All about finding the safest strain,” say the Gordons. “No pass of 4♠ would be forcing in our opinion.”

“If pass was forcing, I would try it,” Weinstein points out. “Here, partner bid game under duress, so in my methods, we are not in a forcing pass.

Falk believes that “at these colors, North’s 4♥ should not be a huge overbid. Partner is likely to be 1=4=6=2. Because my hearts are weakish, I want to offer the option of playing in diamonds. I certainly don’t want to defend 4♠.”

The Coopers, Kennedy and Stack press on with 5♥.

“With a double fit in diamonds and hearts, we should be safe,” says Kennedy. “After all, partner bid at the four level.”

Stack adds: “Cannot pass, since I’m not sure what message that would send to partner.”