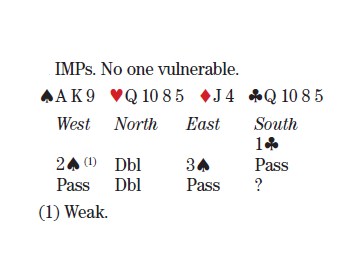 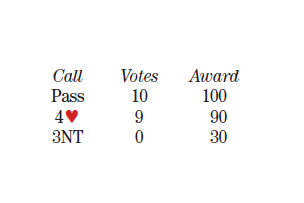 Declare or defend?
The expert panel is divided as evenly as an odd group of people can be.

The passers eagerly await what they hope will be a bit of a bloodbath.

Law of Total Tricks guru Cohen leads the charge: “Let’s teach them a lesson so they don’t keep bidding so much against us. After partner’s marked spade lead and three rounds of spades, let’s see them take any tricks.”

“As long as partner doesn’t have a big club fit for me, this has the LOTT on my side,” explains Weinstein. “The ♠K screams defense and the auction screams trump lead.”

Rigal says, “You could argue that the good Lord dealt me four hearts so I could introduce them, not play for penalty. I may have seen this deal — or something similar — before. As I recall, the expert passed, and three rounds of trumps produced plus 500 against no game. Although I’m obstinate and repeat my mistakes, all I need is for partner to have one spade … is that too much to ask?”

Boehm passes, saying, “It is very likely that partner has a trump to lead, securing a nice plus with no sure game our way.”

Sanborn is putting not one, but two spades in partner’s hand. “I have no offense to speak of, so I will go for the penalty. Partner is likely to hold a doubleton spade here.”

“4♥ rates to be down,” says Lawrence. “My ♠A K 9 are not worth much on offense. On defense, they may be worth three tricks if I can get a ruff. Or, I can play three rounds of trumps if that is indicated. Better by far to have:

“Partner’s bid shows that we have the balance of power and his double is not for penalties,” reasons Stack, “which is obvious because of our spade holding. Having said that, is it obvious that we should bid 4♥ simply because we have a four-card heart suit? The answer is no. There is no reason to think there is a 4♥ game unless partner has a solid opening bid. The penalty expectation at 3♠ doubled is at least plus 300. This should be an easy pass.”

The Coopers are split, but submit “pass” to break their tie (and tilt the entire scoring table). While Steve believes the hand to be much better for defending 3♠ than playing 4♥, Kitty engages in risk management: “Whenever we are getting 300, we are making 420, so why risk minus 530?”

Indeed the 4♥ bidders are focused on one thing, and that is not handing their IMP opponents a game (plus) they didn’t bid.

Robinson says, “It’s easier to make a contract than to get the maximum number of tricks on defense.”

“I wouldn’t pass unless I expected to beat them two tricks,” says Walker. “With this hand, I can’t even be sure of a one-trick set.”

While defending 3♠ doubled could be right, Meckstroth likens it to “playing with fire.”

Kennedy agrees: “I don’t believe we have enough defense to convert the double to penalty.”

“Partner’s hand should be fairly solid, with all his points outside of spades,” the Joyces say. “We do have the four hearts he was hoping for, so we’ll try to make a game.”

Colchamiro explains his 4♥ call: “At IMPs, I gotta bid even though the ♠K is likely wasted. At matchpoints, I would pass and hope for a plus opposite something like:

The Sutherlins believe that “4♥ rates to have a play even if partner has less than an opening bid. And because we are playing IMPs, we are looking for safety. Passing could work, but we could go minus 530.”